Wolfenstein II: The New Colossus erupts amidst a climate of increasing volatility in American mainstream culture, throwing caution to the wind by placing themes of racism and discrimination at the front and center of the overall experience.  A cursory glance at Wolfenstein II at any point throughout its ten-twelve hour campaign, paints a visceral image of opposing-virulent ideologies, highlighting the symptomatic brutality, paranoia and capacity of the collective individual, cautiously navigating their own treacherous reality.  Intensity envelopes every interaction, unraveling a world plagued by fear of the other.  Wolfenstein’s caricaturized Nazi regime oozes with vile intent, exploiting vulnerable demographics and subjugating all who oppose their quest for a world governed by violent fascism.

As the vanguard of freedom’s final resistance faction, your task is to combat industrial scale slaughter with wholesale Nazi extermination.  The end result is a blood soaked experience, blending dystopian alternative history and science fiction, into one of the most unique single-player campaigns of the year.

A series of unfortunate events

Picking up precisely where Wolfenstein: The New Order left off, protagonist William “BJ” Blazkowicz is left clutching the fleeting remnants of an excruciating existence.  A familiar voice cries out in the distance as consciousness fades and darkness careens towards the gaze of a desperate mother, delusional in her convictions.  Her voice trails off into the void, as static aberrations reveal the skeletal visage of a sinister foe, and an impossible choice.  Doubt slithers its way into a broken man, who has given his body and mind for the cause.  A lamenting inner monologue welcomes the warm embrace of death- but your fight is not yet over.  The horrid notion of Nazi authority thrusts you back onto the frontlines of the American insurgency.

You awaken to a nightmarish dystopian America, torn asunder by Nazi occupancy under the control of the sadistic Frau Engel, who is hell-bent on eradicating the infamous “Terror Billy,” and the rest of your crew.  Engel steals every scene with depraved charisma, as she taunts and toys with her victims, reveling in their torment.  Hunting you down is made easier with retro futuristic drones stalking the gnarled steel remains of American architecture, as you navigate the treacherous aftermath of an atomic bombing of Manhattan.  The darkness of labyrinthine devastation extends its tendrils towards the fleeting light of an ominous sky, as cultural icons of their era lay shattered amidst rubble and ruin.  MachineGames has crafted profoundly evocative environments, embodying feelings of isolation and hopelessness, in a world teetering on the precipice of madness.  Grim set pieces drive the tone of dire circumstance from one scene to the next, as choreographed depravity unfolds before the player in real time.  Purposeful design permeates every aspect of Wolfenstein’s visual aesthetic.  Realistic lighting and shadow effects wash over each visual asset, providing depth and atmosphere to relatively small scale environments.  Crisp resolutions, vast draw distances and abundant particle effects are flawlessly optimized for smooth visuals in high fidelity on PC. 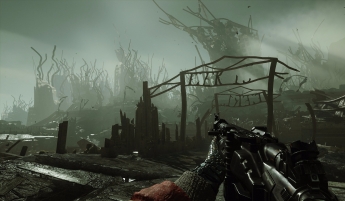 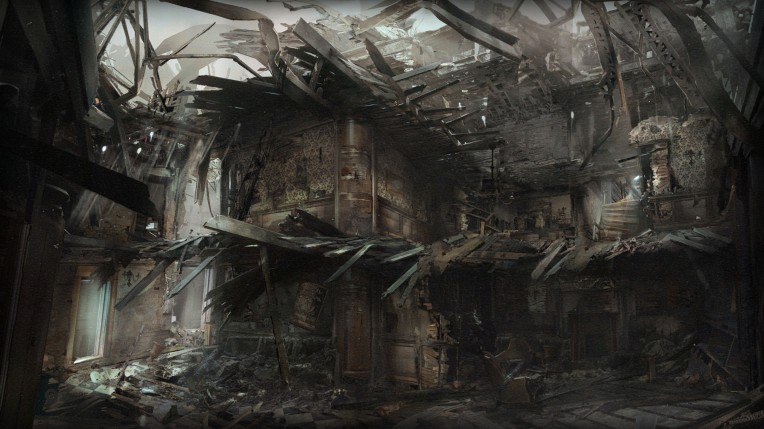 The New Colossus puts the player in control of the most efficient Nazi killing iteration of Blazkowicz to date.  Highly responsive combat feel accessible, rewarding impulsive risk with gruesome animations.  Kinetic melee executions tear enemy limb from limb, bullets collide with devastating impact; showcasing brilliant animations and weighted sounds, as enemies recoil in attempts to preserve their wounds.  The pace of gunplay escalates to the rhythmic flow of its predecessors, as chaos erupts in violent spectacle.  Alternatively, the player can approach each encounter with an element of stealth.  Stalking enemy commanders and silently dispatching enemies with expeditious lethality, leaving morbid omens in your wake.  Stealth becomes increasingly difficult to properly implement, as narrow spaces are over-utilized, causing the game to feel a bit claustrophobic at times and making it difficult to track enemy patterns and positions.  As you progress throughout the game, the necessary variables to account for in combat increase, as new technologies become available for both the player and the enemy.  Whatever your style of play, a revamped perk system levels-up in accordance with your preferred method/s of killing.  These upgrades, in conjunction with new combat rigs and loose mission structure, encourage creative approaches to each combat segment, keeping gameplay fresh and exciting.  Additionally, players can unlock extra modes by collecting Enigma Cards scattered throughout each level.  These modes expand the gameplay and provide ample replay value for tenacious fans. 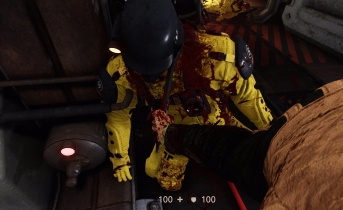 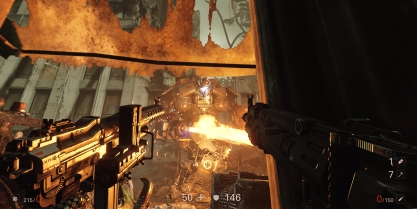 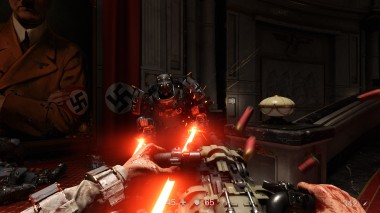 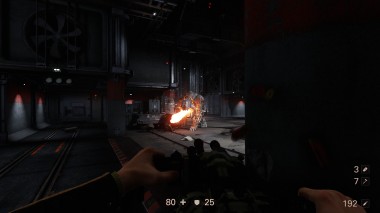 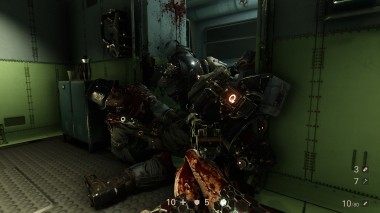 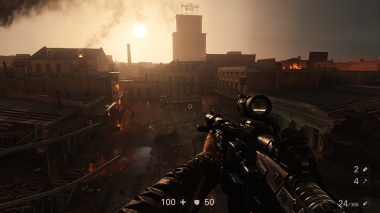 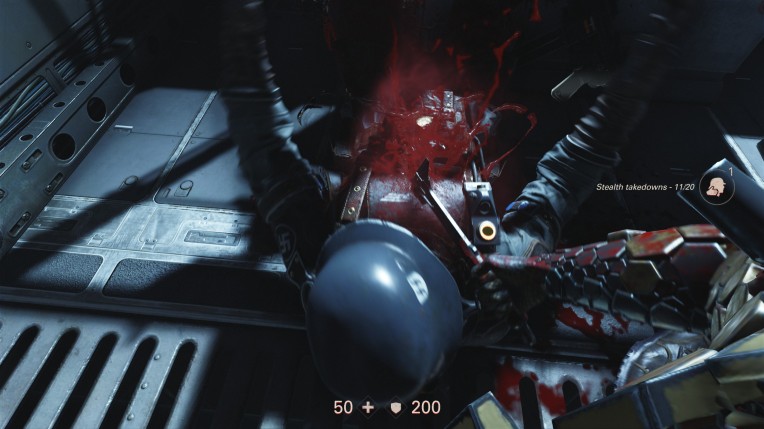 While frenetic gameplay continues to drive the Wolfenstein experience, taking a step back from Nazi blood-lust reveals a complex mix of rich contextual elements, compelling storytelling and a reverent examination of abuse, sexism and racism.  If you dig deep enough you can stumble across Nazi letters scattered throughout each level, written to loved ones, expressing deep adulation, longing and deep regret.  Throughout the campaign, the player will witness depictions of Ku Klux Klan members parading alongside Nazis and an alarming number of the American populous espousing Nazi rhetoric.  These discoveries peer beneath the surface of a callous regime, by examining the collective individual and our capacity for great evil under the right circumstances.  These elements draw parallels between the player, the Nazi, and their victims.  Evoking a deterministic empathy for all sides, by challenging our predisposed “certainties” within inconceivable realities. 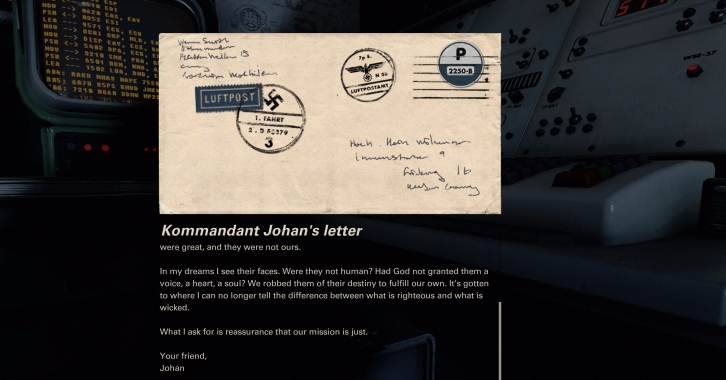 Seamlessly interwoven between gameplay segments, are brilliant cutscenes, which highlight the dynamic contribution each character makes to the narrative.  Each over-the-top NPC you encounter represents a marginalized demographic, breathing humanity into the world by sharing stories of hopelessness, loss, oppression, anger and nostalgia.  The main story grapples with the nature of violence as the only viable resistance to monolithic oppression.  Horrific revelations of Blazkowicz’s past highlight his experiences with cruelty, racism and depraved violence.  Lending context to the killing, as anger fuels the intensity of combat and his insatiable thirst for vengeance. 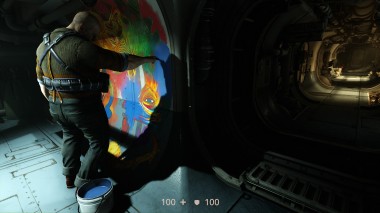 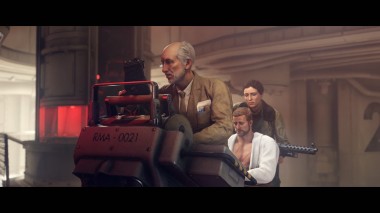 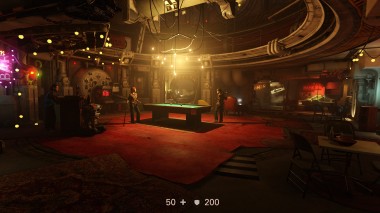 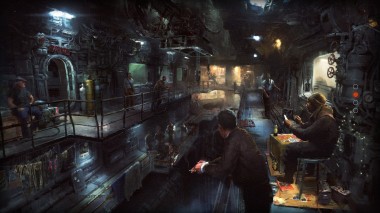 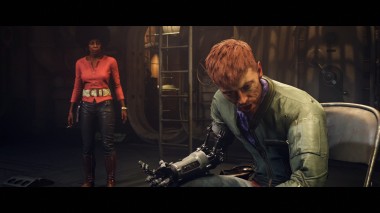 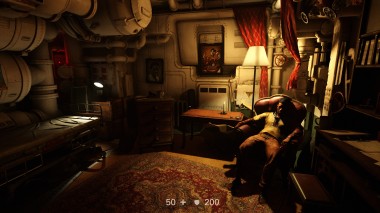 While the game emphasizes the somber tones of internal strife, it balances itself with humor and conviction provided by its outlandish cast of characters.  Dramatic moments are often interrupted by compulsory behavior, often mocking the setup focus for each scene.  Outstanding writing successfully navigates complex themes of mortality, ideology and humanity, resulting in one of the most tactfully written pulp action stories in recent memory.

Throughout history, systematic oppression has increasingly divided the general population with divisive tactics which obfuscate the true source of a common strife.  The New Colossus comes at a time in modern history where this trend has reemerged as misdirected hatred for the “other,” threatens social equality to the point of violence.  MachineGames has managed to perfectly utilize the vehicle of violence to inject the player into the center of its demanding subject matter.  Equal parts savage, humorous, and prophetic, The New Colossus is not one to miss.

This is a text widget, which allows you to add text or HTML to your sidebar. You can use them to display text, links, images, HTML, or a combination of these. Edit them in the Widget section of the Customizer.
%d bloggers like this: