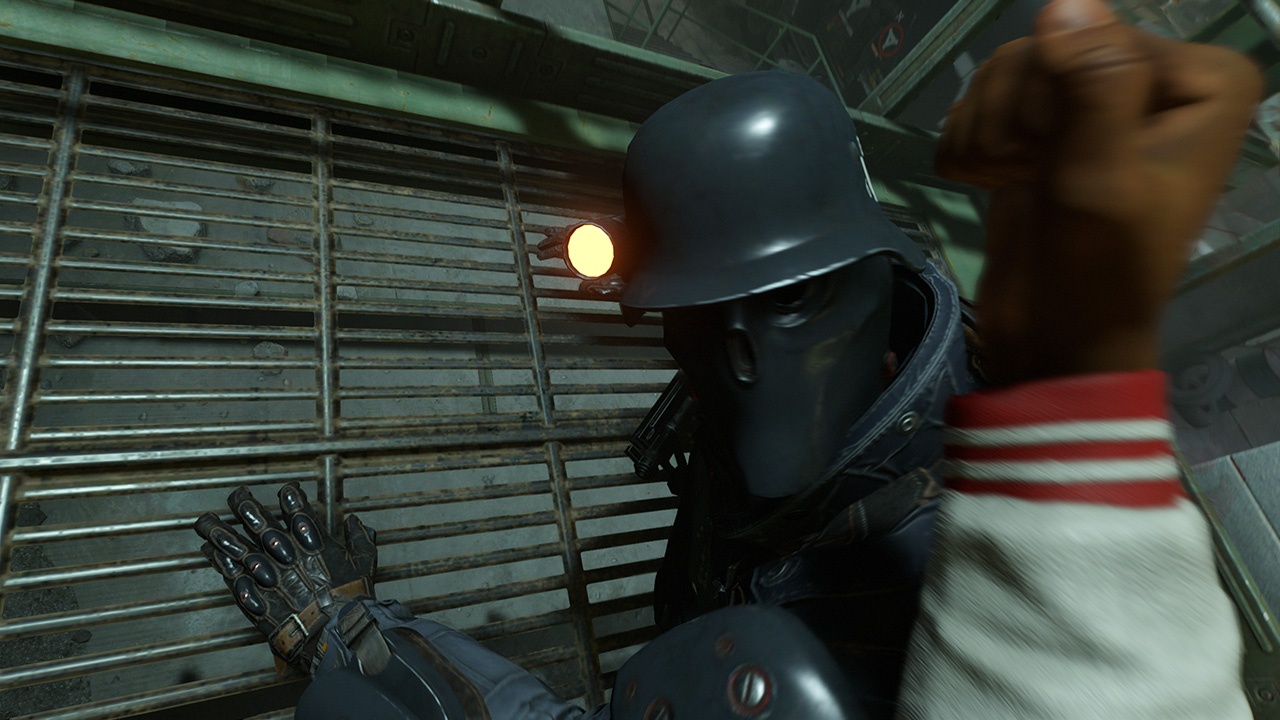 The frigid embrace of concrete stirs you from a sadistic dream, as roaches scurry to abandon their investigation.  A warm glow permeates the opaque reality of confinement, as maniacal screams echo from down the hall.  The imposing clank of a soldier stalks a narrow corridor outside your cell, tormenting the imprisoned with previsions of torture.  A desperate voice calls out through a crack in the wall, informing you of a mounting group of American revolutionaries located in Chicago.  Beaten, broken and dominated by rage, your task is to escape Nazi imprisonment and make contact with the local resistance, slaughtering all opposition along the way.

The Adventures of Gunslinger Joe is the first episode of “The Freedom Chronicles” DLC for Wolfenstein II: The New Colossus.  Putting the player into the role of Joseph Stallion, a former quarterback responsible for dismantling the Reich’s most talented athletes in their own rigged game.  Stallion’s rebellious gesture offends the pretentious antagonist, Ubercommander Roderick Metze, who responds by imprisoning Stallion, so that the Reich’s scientists may conduct their vile experiments, in attempts to genetically enhance their own kind.  Scattered throughout each level are various letters and gruesome depictions of how far the Reich is willing to go to push the boundaries of Nazi eugenics.

In most regards, Stallion is comparable to Wolfenstein’s staple protagonist “BJ” Blazkowicz, with the exception of relatability.  The New Collosus succeeded in humanizing the grizzled Blazkowicz through the vehicle of pervasive inner monologues, revolving around self-doubt and fear of a world dominated by Nazi subjugation; should he die before bringing an end to it.  These moments pierced the veil of a calloused hero, expanding the depth of this character beyond the typical one-dimensional mold of prior installments.  This feature extends itself to the DLC, however, Stallion feels antithetical to Blazkowicz in this regard, trading substance for campy cliché. 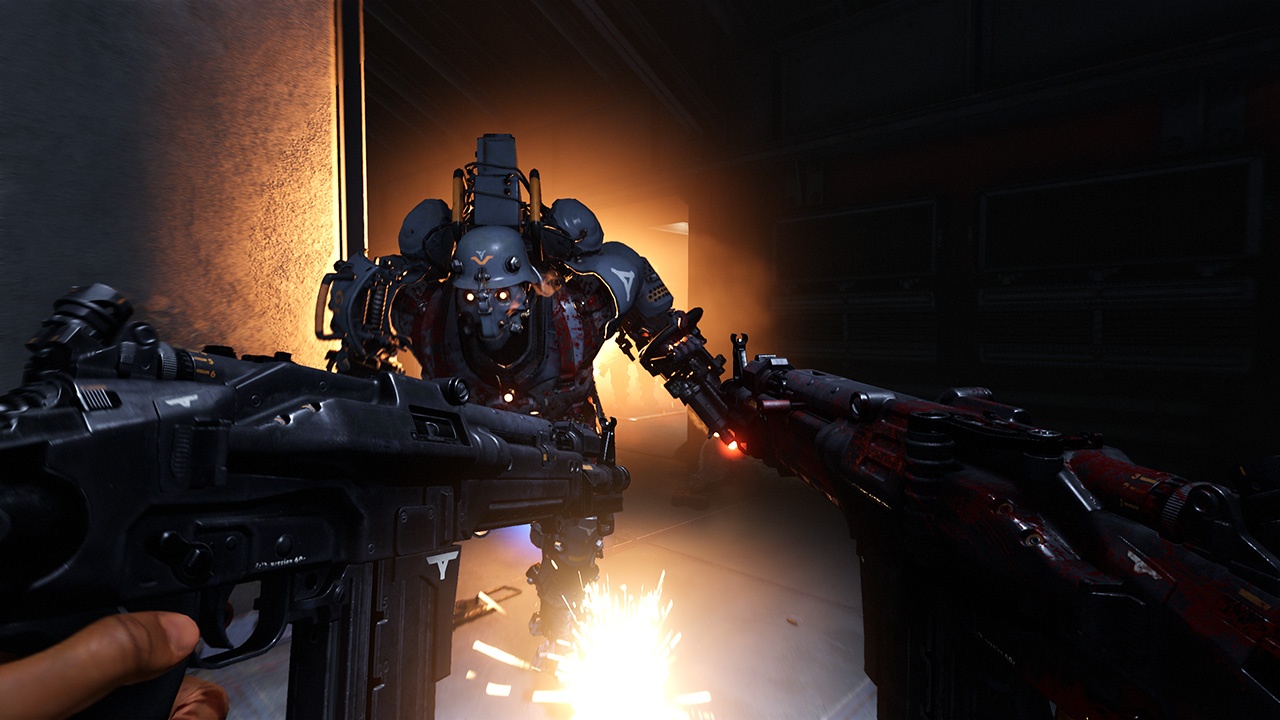 Built into each outlandish persona of the base game is the true cost of freedom, developing a meaningful connection to the overall story by rallying each dynamic character around their vulnerabilities and sacrifice.  Gunslinger Joe fails to develop meaningful narrative for Stallion and his inexplicable capacity for violence, sacrificing much of what made The New Colossus so inventive.

Much like 2016’s Doom, the crux of gameplay in Gunslinger Joe revolves around chaos generated by the sheer volume of enemies the player is presented with, and how they adapt their approach from one encounter to the next.  Attempts to implement my preferred stealth approach proved futile, as the weapon upgrades and perks available catered more to mayhem playstyles.  Evidenced by the predetermined upgrades, a lack of weapon suppressors and the amount of explosives scattered throughout the environment.  Unfortunately, all of these upgrades and weapons will be familiar for those who completed the original campaign.  Unlike Blazkowicz, Stallion is limited to using the Ram Shackles contraption, while the hatchet has been replaced by fists and canned goods to throw at enemies.  While these quirky replacements suit the character, they fail to provide new gameplay mechanics to keep combat interesting.

Combat remains fluid, with tight controls, however the restricted arsenal at the player’s disposal makes Stallion feel far less capable than Blazkowicz; thus, presenting more of a challenge on “Do or Die,” (very hard) mode than The New Colossus offered.  As hordes of Nazis erupted from every corner of the map, I clamored to recover resources while transitioning from cover, in attempts to exploit the environment by putting myself in a position in which I could deal a sufficient amount of damage to the enemy.  Despite the role reversal of aggressor to aggressed, the difficulty felt justifiable and forced me to prioritize my targets while employing proper timing.

Gunslinger Joe offers ten new achievements and one additional combat simulation outside of its two hour long campaign, comprised of three chapters spanning prisons, sewers, warehouses, the streets of Chicago and Venus (again).  Despite each level feeling more spacious than the base game’s offerings, many of the visual assets and architecture have been recycled.  Exploring each level revealed entire set pieces taken directly from the original campaign.  Bland environments, in conjunction with reused enemy designs, strip away the metallic allure and crisp resolutions found in The New Colossus.  Replacing the depth of profoundly evocative atmospheres with redundancy.  Fortunately, dynamic lighting effects manage to compliment the game’s more claustrophobic sections.  While impeccable optimization on PC facilitates user feedback, via seamless transitions from one frame to the next. 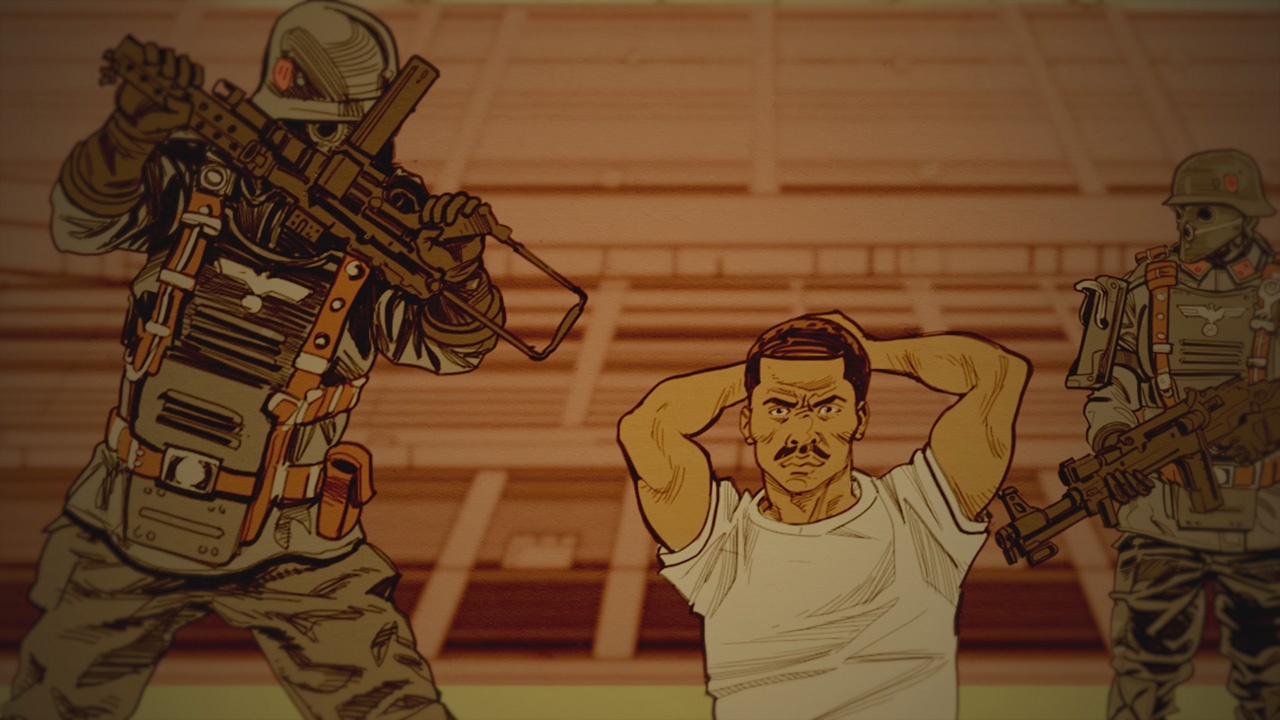 While the world feels flat and uninspired, comic book style cutscenes provide a clever mechanic to expedite the story without interrupting the accelerated pace of the action.  Completing each level felt rewarding, as each still panel progressively examined the connection between Stallion and the depraved Ubercommander Metze.  Themes of family, bigotry and retribution, drive the narrative through twists and turns, as the scale of your objective rapidly transitions to a much broader scope.  Overall, the gameplay was better served by this mechanic than the actual plot itself, which often felt incoherent.  Perhaps by writing more contextual elements into Stallion’s self-reflections the balance of storytelling and gameplay could have been better achieved.

Titles such as 2016’s Doom, Deus Ex: Mankind Divided and The New Colossus offer some of the most compelling audio landscapes in recent memory.  Gunslinger Joe retains precisely what makes its counterpart a symphonic masterpiece by modernizing classic tones from earlier installments in the Wolfenstein series. Somber melodies swim through your senses as whirring crescendos transition into rapid synth beats, layered atop heart pounding bass.  The soundtrack ebbs and flows to match the intensity of combat, while conjuring an underlying element of nostalgia.

The Adventures of Gunslinger Joe feels more obligatory than inspired, failing to expand on what made Wolfenstein II: The New Colossus 2017’s best action title.  Completionists may find value in rounding out their achievements; however, for even die-hard fans of the Wolfenstein series, the $9.99 price tag does not justify the lack of replayability, the brevity of its campaign, or the dull quality of its content.