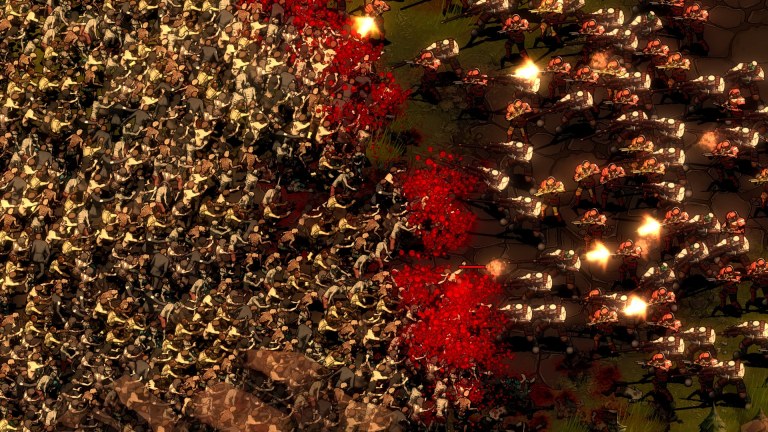 Intense, unforgiving and addictive, They Are Billions combines the most appealing aspects of classic real-time strategy games of yore (i.e. Starcraft/Warcraft), with built in survival and tower defense elements.  The end result is an eclectic fusion of influences that evolves beyond genre tropes, into an intoxicating experience which rewards persistence and tactful strategy.

The game begins with a humble command center, located within a randomly generated map, with randomized environmental asset placements.  An immense feeling of vulnerability sinks in, as the urgency to begin expansion compels exploration and resource acquisition in anticipation of the impending swarm of bloodthirsty zombies.  Exploring the surrounding area validates such concerns, as shambling swathes of undead disguise their savage capacity for violence with decayed senses.

Cautiously navigating around enemy awareness in attempts to gather resources can be quite challenging at times.  Enemies will react to sights and sounds, groaning to alert their fellow predators they’ve spotted supple human prey.  At the beginning of the game, players only have access to five units; thus, selectively choosing your targets and treading the perimeter of visibility is crucial for early game success. 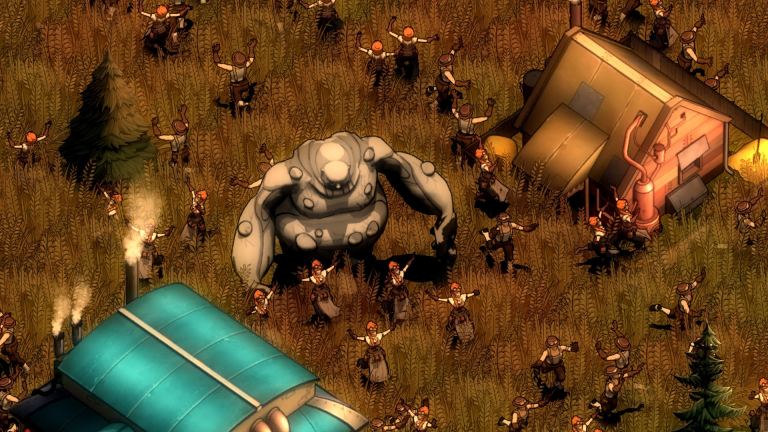 Currently, survival mode is the only option players will have to choose from, although Numantian Games intends to release an eventual campaign later on.  While this may sound like a necessary addition, there’s enough visual context provided to effectively convey the tone, atmosphere and narrative, without the need for a fleshed out main story.  At face value, the story is your typical zombie apocalypse.  The last vestiges of humankind are being devoured by the brain-hungry undead, and it’s your job to keep them at bay while cultivating a prolific colony.

Survival mode offers varying degrees of difficulty in the form of customizable presets, allowing players to adjust map type (only one available initially), game duration (80-150 days) and the amount of infected which populate the map.  Decreasing or increasing each setting modifies your score factor  percentage up or down, in accordance with the level of difficulty chosen.  Higher score factors allow players to unlock new maps, should they achieve a final score high enough to do so.  The difficulty curve ramps up dramatically on higher levels, as the undead will populate more of the map, attacking earlier and more aggressively.

Late game success depends heavily upon your ability to effectively multitask. Maintaining your colony, defending your colony, gathering resources and expansion can feel overwhelming without an efficient strategy.  Executing said strategy can prove difficult at times, as a result of randomized resources and terrain layouts.  Some playthroughs provide ample choke points and resource locations, while others place you in the middle of open terrain.  Adapting your strategy to randomized circumstances keeps gameplay dynamic, however much of your success will be predetermined by this formula, resulting in a more reactive approach to progression.

Fortifying your defenses in preparation for the next looming encounter is critical for progression.  Overlooking weaknesses in your defenses will result in a swift end for your campaign, as the undead destroy buildings and infect the population in the blink of an eye.  Containing such threats requires isolating the zombie onslaught by destroying buildings before they become infected, and exterminating your unwelcome guests.  At times, it feels unfair to succeed for several hours only to fail in one fell swoop, sending you back to the start screen to begin again.  While this approach fuels the intensity, it discourages players still learning the game from immediately jumping back in.  Fortunately, there is a pause feature which allows players to issue commands/build orders and allocate production at their own pace, making the game more accessible as a result.

The importance of a properly planned settlement becomes evident by mid-game, when your defenses and resource generation are truly put to the test.  Most buildings and units require multiple resources to generate and sustain, such as colonists, workers, wood, stone and gold.  Prioritizing one resource over another puts production in jeopardy until the appropriate requirements are satisfied by expansion or redistribution. 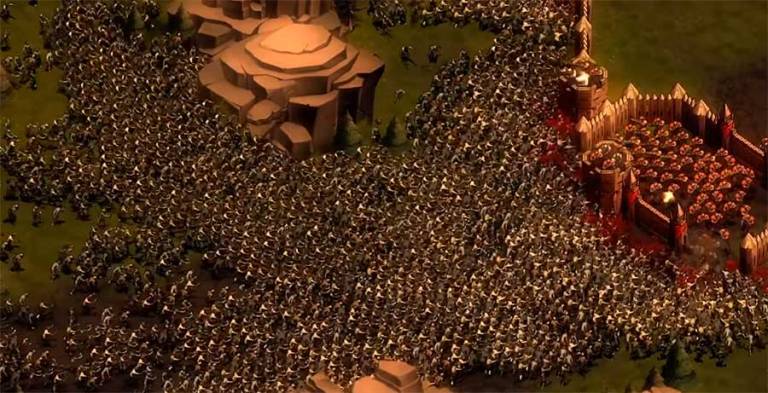 As increasingly powerful waves converge on your position, advanced technologies and units will be your main line of defense.  Ballistas pierce rotting flesh, shock towers incapacitate ravenous mobs, snipers pick off high value targets from great distances and titans mow down hordes of infected with expeditious lethality.  Rapidly transitioning between units is made simple with an intuitive user interface, which allows for grouping and swift selection.  Unfortunately, units are sluggish and it can be difficult to accurately predict where the next attack will come from due to vague indications on the map.  Often times, my defenses were torn asunder by the time mobile reinforcements had arrived.  As the game progresses, your defenses will be spread thinner and closer to enemy strongholds as a side effect of necessary expansion.

Protecting your settlement as thousands of 2D undead bear down like a tidal wave cast upon the rocks is a sight to behold; equally unnerving as it is satisfying.  Numantian Games has developed an incredibly well optimized engine which can support up to 30,000 units on Core i7 processors – a technical marvel!  Watching thousands of undead splatter before your defenses is uniquely addictive fun for fans of tower defense games and turtling (strategy in RTS games which emphasizes heavy defense, with little to no offense).

The steampunk aesthetic of They Are Billions lends itself well to the apocalyptic atmosphere of its world.  An oppressive amber tint washes over the screen, muting the vibrancy of whimsical architecture.  Crisp outlines highlight the low poly allure of each environmental asset.  Radiant light illuminates the imperial pinnacle of architectural achievement, while dreary color palettes of the ambling undead erupt from the shadows of ominous terrain.  The art style, in conjunction with the amount of visual assets available on-screen evokes the paranoid tone of the setting with compelling illustration.

Bloated crows caw overhead, brimming with the remains of an inconspicuous possessor.  The remedial fluttering of arrows pierce the air before colliding with spattering precision.  Decaying bone and sinew fractures and tears with a slithering hiss and hysterical snarl.  Howling winds disguise the haunting wails of metamorphosis, as they flow into the dark tonality of somber notes with resonating contact.  The soundtrack masterfully weaves itself into the layers of environmental sounds until the two are indistinguishable from one another.  The soundscape is methodically crafted but often interrupted by repetitious unit speech.  While the the campy lines seemingly intend to replicate one of the more humorous aspects of Warcraft, there isn’t enough variety.  The voice acting for the ranger in particular seems to have missed the mark in regard to matching the tone of the character.  It’s a minor complaint at most, only highlighted by the fact that the overall sound design is transcendent.

They Are Billions is undoubtedly a worthwhile experience for fans of classic RTS games and defensive strategy.  While it may not revolutionize the genre, it manages to challenge the status quo of modern strategy games and their emphasis on aggressive tactics.  In its current form, there’s a well-polished foundation for future updates which expand customization and available game modes.  Developing a competent strategy to surmount the steep learning curve attached to its multi-phase gameplay provides dozens of hours of compulsory entertainment.

This is a text widget, which allows you to add text or HTML to your sidebar. You can use them to display text, links, images, HTML, or a combination of these. Edit them in the Widget section of the Customizer.
%d bloggers like this: