Day one of the PGL Bucharest Major’s is officially closed, and the best-of-one format produced some of the most kinetic matches of the professional season thus far.  Let’s recap two of yesterday’s most exciting matches, to see who appears poised for success moving forward.

With sixteen participating teams and only eight slots available for the playoffs, the pressure to secure a first round win was immense, as Dota 2’s top competitors demonstrated aggressive play styles resulting in pivotal clashes and one momentous spectacle after another.  Two of yesterday’s most memorable matches between Virtus.Pro/Optic Gaming and Natus Vincere/OG, compared the potency of team compositions with a heavy reliance on early dominance versus late-game scalability.

In an effort to maintain the momentum of their recent ESL One Katowice victory, Virtus.Pro drafted a well-balanced mix of strong lane compositions and late-game scalability.  Alternatively, Optic Gaming prioritized strong early game potential, at the expense of damage output on par with that of Juggernaut.  Without an effective counter for Juggernaut’s ultimate, Optic would have to judiciously select their engagements and apply pressure from start to finish.

The laning phase resulted in relatively strong offlanes for both teams in different aspects.  While VP’s aggressive offlane combination of Oracle, Juggernaut and Chen managed to kill both Tidehunter and Crystal Maiden before the five-minute mark, Pelle “Pajkatt” Olsson’s Gyrocopter was able to successfully farm with the support of Ludwig “Zai” Wahlberg’s Io.  VP focused much of their early game attention on keeping Quinn “CC&C” Callahan’s Storm Spirit behind with frequent rotations from Vladimir “RodjER” Nikogosyan’s Chen and Alexei “Solo” Berezin’s Oracle.  The effective mitigation of Storm Spirit’s early impact left plenty of space for Roman “RAMZES666” Kushnarev’s Juggernaut to secure ample farm with minimal resistance.  As the laning phase drew to a close, VP was ahead in most aspects as a result of timely rotations and their capacity to push tier one towers with Chen’s army.  The mid-game remained fairly even, as both teams farmed and effectively held their respective perimeters successfully, with the exception of a massive team wipe for Optic, which netted Juggernaut a meteoric rampage.

It wasn’t until around the twenty-seven minute mark, that the advantage had begun to shift in Optic’s favor, as VP chose a poor engagement on Storm Spirit with the rest of Optic closely behind.  The counter initiation from a flawlessly executed ravage caught the entirety of VP in its wake, turning the tide (no pun intended) of battle instantaneously.  With all but Dragon Knight dead, Optic would take this opportunity to acquire aegis and expand their dwindling map control.  After a failed attempt by VP to push bottom barracks, both teams found themselves at middle for a poorly chosen counter engagement by VP.  Once again, VP failed to output enough damage prior to being caught by another massive ravage directly into call down.  With the entire team down and only two buybacks available, VP would lose both mid and bottom barracks.  In a desperate attempt to acquire aegis, VP entered the Rosh pit with a well aware Optic prepared to initiate the final fight of the match.  Another call down directly on top of VP, coupled with sufficient targeting from Storm Spirit solidified Optic’s victory!  Leaving VP with no other option but to forfeit the match.

One of the most anticipated matches of day one did not disappoint fans of frequent skirmishes and epic plays!  Both teams drafted strong lineups, with Na’Vi prioritizing control and damage output, while OG’s strategy revolved around pressuring Razor and developing Morphling into the formidable asset he becomes in the late-game.  While Na’Vi’s draft was more synergistic in terms of abilities, OG managed to drive the pace of combat despite a few mistakes along the way.

The match opened with a first blood on Beastmaster in the offlane by a dedicated tri-lane from OG, which consisted of Earth Spirit, Morphling and Witch Doctor.  Top lane quickly became a tit-for-tat scenario, with both teams exchanging kills back and forth.  Amidst all the fighting, Tal “Fly” Aizik’s Witch Doctor commenced his roaming reign of terror by securing OG’s first kill on Razor-who possessed the highest net worth at the time.  In under ten minutes, Witch Doctor had secured four kills, thus creating space for Roman “Resolut1on” Fominok’s Morphling to free farm.  With Morphling now claiming the top spot in net worth, Witch Doctor and Earth Spirit would shift their focus to killing a seemingly abandoned Razor in bottom lane.  With another easy pick-off acquired, OG further expanded their map control by smashing Na’Vi’s tier one and two bottom towers by the sixteen minute mark.

Panic began to set in, as Na’Vi were quickly falling behind in terms of objectives, kills and net worth.  In attempts to press their advantage, OG pushed deeper into enemy territory, where they began setting up riskier plays, stemming from overconfidence in their lead.  Without Morphling’s assistance, OG decided to engage the enemy instead of retreat, ending in a much-needed triple kill for Razor.  Hoping to capitalize on their recent victory, Na’Vi decided to go on the offensive by utilizing aggressive ward placements with the intention of catching OG’s cores alone.  Unfortunately, a well-coordinated attempt to pick-off Morphling was negated by his robust sustain, coupled with swift counter engagement from Witch Doctor and Earth Spirit.

While OG managed to maintain a decent lead thus far, they began picking more fights they couldn’t win.  Resulting in two critical team fight losses-one of which for the aegis.  OG was beginning to lose momentum, as Razor and Outworld Devourer grew closer to Morphling’s advantage with each subsequent team fight.  In a shocking turn of events, Na’Vi managed to destroy mid barracks only to quickly retreat in defense of their own.  Just as OG shattered tier three tower, Naga popped song of the siren but Na’Vi’s damage wasn’t enough to penetrate their opponents massive sustain.  OG managed to finish off Razor, however they couldn’t demolish mid or bottom barracks in time.  The match would most certainly come down to the next team fight.  At the forty-five minute mark, Na’Vi’s fate would be decided, as OG decimated their ranks with a combination of death ward and Morphling’s extraordinary damage output. 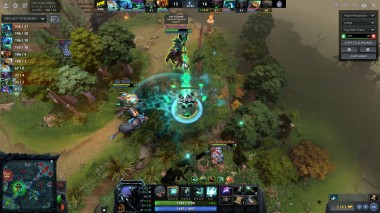 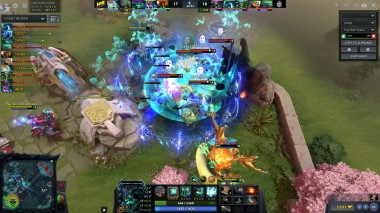 As the intensity grows leading up to The International, it will be fascinating to see which teams end up in the top three.  If the PGL Bucharest Major 2018 is any indication, it could be anyone’s guess.

This is a text widget, which allows you to add text or HTML to your sidebar. You can use them to display text, links, images, HTML, or a combination of these. Edit them in the Widget section of the Customizer.
Loading Comments...
Comment
×
%d bloggers like this: